Singapore is very Multiple Nuclei Model Like. I will spill off the following base on my opinions, this is not a professional writing, of course, hey I am still a first-year student so what ya expect? The very first time I googled Earth Singapore I was kinda amazed how the transport system and distribution of different industries in Singapore are placed so it doesn’t affect each other land value. Click the following pic for a larger version. 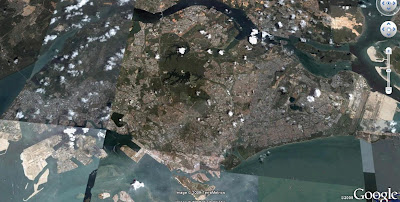 Let’s do a little time line reflect, this is based on what I have read on Lee Kuan Yew’s book, “The Singapore Story” and also some online information which I have gone through.Ever since second world war, Singapore definitely had a huge problem in population management, don’t ever mention about Urban planning yet. As a consequence of the war and the lack of economic development around 1940’s to 1950’s, and as well as the movement of migrants, most of them from our very own country, Singapore definitely has overcrowded slums and squatters during mid-1959.
History? What happened then?
Of course, there was a plan for Urban Renewal. It was the People Action Party (PAP) Government had been in charge then, they put urban renewal on the part of national improvement policy, urgently. However, it was before 1959, that the previous government had the master plan to design to solve the population problems. But due to lack of Urban planning experts and professional staffs so it was not successful. Then? UN United Nations came in, there was a professional team from UN asked by the PAP government to cope with Urban Matters and redevelopment Plan in 1961. Then it was the 2 pilot developments were initiated at the end of 1964 by the government who gave the government enough confidence and sufficient amount of public housing and business areas.
Then it was after that the URA was formed (Urban Redevelopment Authority). The Urban Redevelopment Authority (URA) is Singapore’s national land use planning authority. URA prepares long-term strategic plans, as well as detailed local area plans, for physical development, and then co-ordinates and guides efforts to bring these plans to reality.You could read more about them here .
What about Singapore Land?
There is only a limited land area of about 699sq km, and not all the land area can be developed. For example water catchment areas already take up 40 per cent of the land area. Height restrictions imposed by their airports on buildings limit how high some of our buildings can go. For instance, flats in housing towns in Tampines, Simei and Changi cannot exceed 12 storeys because of the flight paths of planes from Changi International Airport. Land also has to be set aside for military uses. And mind you that Singapore’s Military power was way  ahead our very countries ever since their independence. They had their tanks before us! 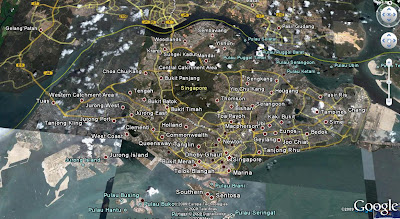 There are basic and creative steps of URA developed, first as usual, as islands, reclamation off their seashores. And as you can see the land usage is pretty much used up, and very very utilise. They had the idea of intensifying land use by locating various facilities together instead of separately.For example, they locate stormwater collection ponds under road flyovers; they build stack factories; they go underground; they locate train stations and bus stations over each other. and also Singapore’s being very prioritised on minimising constraints on development by using technology such as cleaner power station fuel, or they group all the industry together and relocate them off shore. 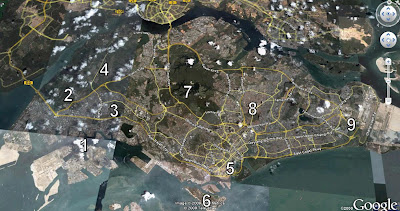 Now I would just roughly go around the Island. Again you could click larger to get a better picture what I am describing. The reason why I say Singapore town development is pretty same like Multiple Nuclei Model is I think the transport system is almost to the point of excellent. Their coverage of MRT is already almost throughout the Island except for North of Jurong West which is 2 an 4 areas and even bus service is satisfying enough, they almost cover all non-residential areas in Singapore, and very very frequent bus rides, just very efficient la overall =) So I believe this has really boost up the market of various sectors.
In fact, the geography of Singapore, as you all know, it’s a common trading and regional meeting area. Singapore didn’t undergo industry evolve like us, as production sectors, they did not have resources at first, it was their good relation with China last time that gave them the opportunity to invest in their country but setting up the assembly point and manufacturing sector there since they are strategically located. Since then, Singapore grew rapidly.
URA seems well to locate two biggest worried sectors along the shore, worrying that they will affect the land values which is very very precious to most Singaporeans and the government themselves. In Area 9, there goes to Changi Airport, so far the best Airport in the world, and beside it it is Pulau taking with the under develop Military Base, Singapore has 5 Airports so far (Based on what i have seen from google earth) I don’t know how many not in used and all, but Changi Airport alone is well capable of handling many flights, just look at the runways and terminals it has. Other 4 will be the old Paya Lebar airport and 3 more military airports.
8 will be basically landed properties. It was because during the mid-1990’s that was the place being developed along since there was no in need to build HDB flats and the old roads were passing there to reach the southern part of British priority.
5, is, of course, the heart of Singapore, the town of Singapore. This will be the CBD Central Business District, it was pretty similar to how Penang grew with Georgetown in the first place. From the port near by, and then the administrative not far away. Here lie major shopping malls and city tourism.
6 is, of course, Sentosa Island, CBD seems to have completely devoted the whole island for tourism purpose, with cable car well linked from HarbourFront mall, and furthermore the construction of Marina Bay which is expected to complete next year will catch the many eyes of casino complex around the world.
1 will be the key I believe. It’s Jurong Island with it’s mega size port. It’s the main source of how Singapore grew I guess. Singapore is more towards a service industry right now compared to manufacturing, as they have Singapore expo to host different global events, and their first world facilities are all ready to accommodate the needs, but this port is more than a port island. URA has considered of changing the whole Jurong Island into a port or manufacturing Island! I’m just guessing. Look at the whole island, not even a single tree! But they place it at the mostly off shore so no land value of residents especially around Jurong would be disturb I guess. Even Pulau Brani and Pasir Panjang, almost the whole southern coast is port activities. Truly one of the largest port compared to the size of a nation or island!
3 will be mostly HDB flats. I guess it was during the national plan that they build it there to support the man force for Jurong Port and the manufacturing Industry around there. This is the picture of it. 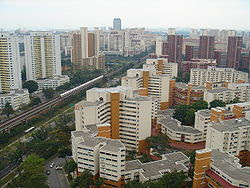 2 and 4 reserves as the water catchment areas. Of course, they will need to reserve it for future use. However, during the last archifest visit, I have seen the plans that URA wanted to develop 5 big recreational parks there. Will update with it soon then.
7 of course reserves as the centre of water catchment, perhaps the only dam of Singapore? in the highest peak? National Zoo and Night Safari is located here too…

So yeap, that’s all I know, sorry for any misleading information, as I have said before, I am just a first-year student trying to understand Singapore’s town planning. If you have any constructive Comments, please do leave it! Thanks!

Taking a Break to Discover my Final Year

CYCLING TO WORK: The Essence of Happy People for Happy Cities

Our Pursuits Towards Happiness